We have discussed the mass and energy transfer in a thermodynamic system. We have also defined thermodynamic process and system property. In an open system mass interaction takes place between system and its surrounding. Energy transfer can happen in both open and closed system.

It is capacity to do work. It may exist in many forms. Energy within the system boundary is known as stored energy. Examples of stored energy are potential energy, kinetic energy, internal energy etc. Energy that in the process of crossing the system boundary is called energy in transition or transit. Examples Heat, work etc. Heat transferred may be designated as thermal energy and work done may manifest as mechanical energy. All stored energy are thermodynamic properties.

The Energy possessed by a thermodynamic system due to its velocity is called Kinetic Energy. Kinetic energy of a mass m with a velocity of V is

It states that the changes of internal energy (dU) of a perfect gas is directly proportional to the change of temperature (dT). Mathematically,

where m is the mass of gas,

and c is the constant of proportionality, known as specific heat of a gas.

Flow work and energy are seen in open, or control volume system as shown in the figure. Energy due to transfer or flow of mass across a boundary is called Flow Energy. Consider a mass (m) of fluid of specific volume v (V = m x v) enters the system at section 1-1 against a force dF (dF = dP x A). The section or layer of fluid displaces by L while doing work for continuous flow.

A system does not contain heat or work. Heat and work cannot be stored but energy can be stored. Energy is property of a system. Heat and work are boundary phenomenon. They are also known as energy in transit. They can be identified only when they cross the boundary (interact with the surrounding). Heat transfer takes place because of temperature between system and the surrounding by conduction/convection/radiation. If heat transfer does not take place between the system and the surrounding, it is called adiabatic. Heat and work are measured in energy units, and they represent energy. So, heat is a form of energy that crosses boundary by virtue of temperature difference. If energy interaction is not by virtue of temperature difference in a closed system, then it is work transfer.

Heat is not a thermodynamic property, but temperature is a property of system. Heat represents energy and its unit is same as that of energy. Unit of heat is Joule (J) or kilojoule (kJ). The unit of rate of heat transfer is kJ/s (kW).
Heat is energy that transfer from hot body to cold body. Temperature gradient is the driving force for flow of heat.

Heat Capacity of a system is the amount of heat which can change the temperature of the system by one degree.

m = mass of the substance in kg,

Solids and Liquids have only one specific heat(c). Gases have two specific heats depending on the process involved:

Thermodynamic work is energy transferred without mass transfer and not due to temperature difference with the surrounding. From mechanics we know that work is done when there is any displacement in the direction of the applied force (Work done = Force x Distance travelled). In a process of a system, work is done when there is movement of the boundary against the surrounding pressure. In thermodynamics, work transfer happens by displacement of the system boundary and such work is displacement work or boundary work (boundary phenomenon).

Upon adddingthe heat to the mass of air the temperature and pressure will increase. High pressure (Force = Pressure x Area) will push the piston upward by a distance x until the equilibrium at state 2 (p2, v2). The amount of work done is

= p V, where V is the change in volume due to expansion.

Quantities whose values depend on the path followed by the thermodynamic process is called path function or process function. Both heat and work are path function. Path functions are inexact or imperfect differential. Let us understand the path function with the help of the following p-v diagram for a reversible expansion process 1-2 in a piston-cylinder arrangement. The process follows the path 1-2.

Total work done may be obtained by integrating from state 1 to state 2.

The area under the curve (p-v diagram) represents the work done during the quasistatic process 1-2. The area will be different for a different path of the process. Thus, work done is a function of the path. In other words, the amount of work done depends upon the path followed by the process (Path or process function).

Similarly, Heat transfer during a quasi-static process is also a Path or process function.

Point functions or state functions are the quantities or properties of the thermodynamic system whose values are independent of the path followed by the process. Their values depend only on the state (point) of the process. All thermodynamic properties are point or state functions. In a process following the path 1-2 where volume changes from V1 to V2 is shown in the diagram.     ∫dv = V2 – V1   Value depends on the final (state) and initial (state) volume only.

The pressure of the system remains constant throughout the process. Example: boiling of water in a boiler at a constant pressure. Figure represents an Isobaric process in a P-V diagram.

The volume of the system remains constant throughout the process. Volume at the initial state is equal to the volume at the final state of the process. Example: heating of a gas in a fixed volume (non-expanding chamber). It is also known as isovolumetric process, or isometric process. Figure represents an Isochoric process in a P-V diagram.

The temperature of the system remains constant throughout the process (dT = 0). This process is governed by the Boyle’s Law and the curve is hyperbolic. The figure shows the isothermal process in P-V and P-T diagrams.

The system does not transfer heat with the surrounding (∂Q = 0). The Adiabatic Law is pvϒ = c, where ϒ is called the adiabatic index (ϒ = cp/cv ) and its value is 1.4 for air.

You may watch this video for Non flow processes

1 Compare Heat and Work in thermodynamics.

2 Describe Specific heat of a gas.

3 Define process function and give examples.

4 Give examples of state or point functions.

All thermodynamic properties like pressure, volume, temperature etc. are state or path functions. Their values depend only on the initial and final state (point) of the process. 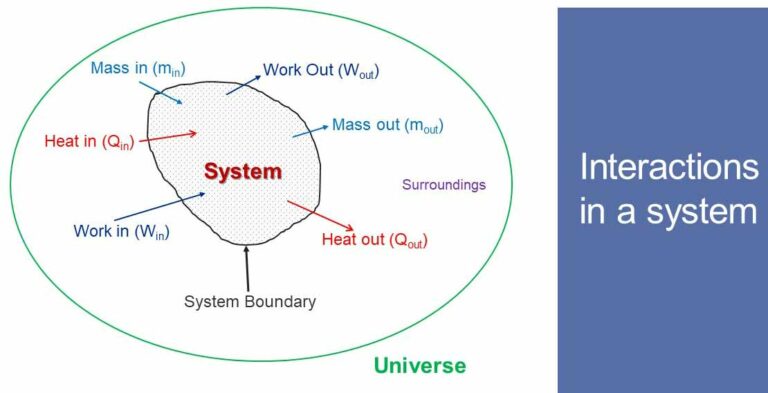 In a reciprocating IC engine, the combustion of the fuel occurs within the engine cylinder. The engine partially converts the heat of combustion to work. 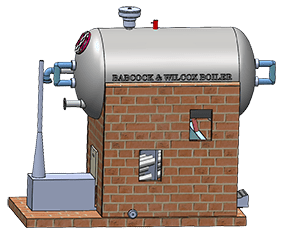 Human Civilization is in crisis with the unprecedented spread of COVID-19 in every corner of the world. More than 1.5 million people have been infected and become sick as of now around the world(at the time of writting this). While the novel Corona Virus pandemic would hit the developing countries very hard, U. S. records…